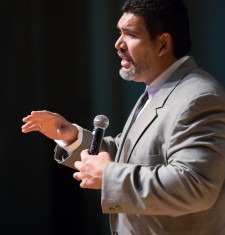 Luther Ellis
Board Member & Family Cause

Luther Elliss is a former American football defensive tackle in the National Football League. He played for the Detroit Lions and the Denver Broncos before retiring to pursue other full time endeavors. During his time in the NFL, Luther was a two time Pro Bowler.
A Spokesperson for Michigan’s Fatherhood is Forever campaign, the National Fatherhood Initiative, Stand Strength Team, The United Way, and numerous other pro-family and pro-life events, Luther is passionate about inspiring youth and family around the nation. A family man himself, he and his wife of 16 years have biological and adopted children, and consider parenting their greatest blessing in life.